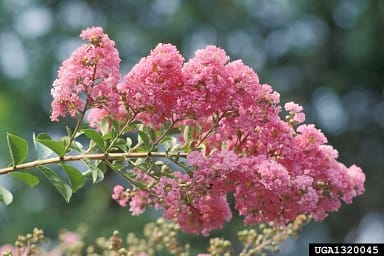 Prune spring blooming azaleas after they bloom and crape myrtles in late winter before growth begins.

Info edited from Pruning ornamental plants in the landscape

Because flowering ornamentals form their flower buds at different times of year, pruning times must be adjusted accordingly. Many spring-flowering plants such as azalea, dogwood, forsythia, redbud and rhododendron set flower buds in the fall, so pruning during the fall or winter months eliminates or decreases their spring flower display. Plants that typically flower during the summer form flower buds on new growth and can be pruned during the winter with no effect on their flowering. Examples of this type of plant are crape myrtle and abelia.

As a general rule, plants that flower before May should be pruned after they bloom, while those that flower after May are considered summer-flowering and can be pruned just prior to spring growth. One exception to this rule is the oakleaf hydrangea, a summer-flowering shrub that forms flower buds the previous season. Another exception is late-flowering azalea cultivars, which bloom during May, June or even July. Prune both the oakleaf hydrangea and the azalea cultivars after they bloom. Table 1 provides suggested pruning times for other plants.

Ornamental plants that are not grown for their showy flowers can be pruned during the late winter, spring or summer months. Avoid pruning during the fall or early winter because it may encourage tender new growth that is not sufficiently hardened to resist the winter cold.

Some shade and flowering trees tend to bleed or excrete large amounts of sap from pruning wounds. Among these trees are maple, birch, dogwood, beech, elm, willow, flowering plum and flowering cherry. Sap excreted from the tree is not harmful, but it is unsightly. To minimize bleeding, prune these trees after the leaves have matured. Leaves use plant sap when they expand, and the tree excretes less sap from the wound.

For more information, see the publication Pruning ornamental plants in the landscape.