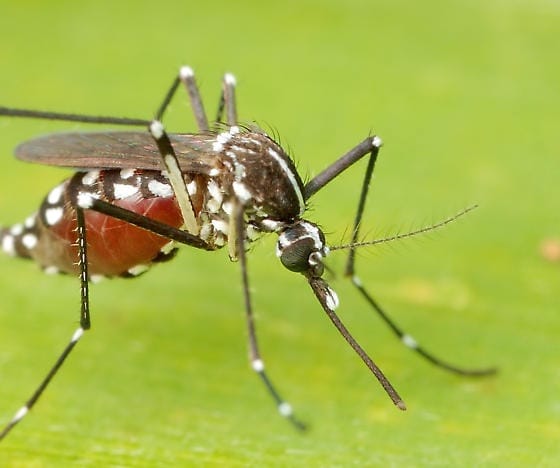 Taken from the April 10 issue of Dideebycha, newsletter of the Georgia Mosquito Control Association

Aedes albopictus was introduced into the Port of Houston in 1985 in shipments of used tires from northern Asia. Movement of tire casings has spread the species to more than 20 states since 1985.

The Asian tiger mosquito is a small black and white mosquito. The name “tiger mosquito” comes from its white and black color pattern. It has a white stripe running down the center of its head and back with white bands on the legs.  These mosquitoes lay their eggs in water-filled natural and artificial containers like cavities in trees and old tires; they do not lay their eggs in ditches or marshes. The Asian tiger mosquito usually does not fly more than about ½ mile from its breeding site and generally flies a considerably shorter distance.

Aedes albopictus associates closely with people and is an aggressive, daytime biting mosquito.  It is native to the tropical and subtropical areas of Southeast Asia, and is now found in 1/3 of the Unites States. New Jersey, southern New York, and Pennsylvania are currently the northernmost boundary of established Ae albopictus populations in the eastern United States.

The tiger mosquito is an important disease carrier in Asia. In North America, Ae albopictus is among the most efficient bridge vectors of WNV. In addition to vectoring exotic arboviruses, this species can also transmit the endemic eastern equine encephalitis and La Crosse viruses in the laboratory and in the field.  It is a competent vector of both Dengue and Chikungunya virus.  In fact, Ae albopictus is a competent vector for at least 22 arboviruses.

A lot of work has been done recently on control of Ae albopictus.  Since it is a daytime biting species and an asynchronous emerger, conventional truck-based ULV spraying doesn’t always work well.  According to one study, an integrated pest management approach can affect abundances, but labor-intensive, costly source reduction is not enough usually to maintain Ae albopictus counts below a nuisance threshold.