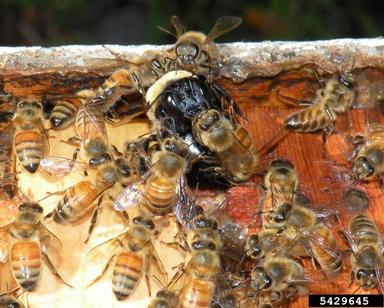 Many homeowners may grimace at the sight of grubs, caterpillars or other pests lurking in their lawns, but understanding when and how to apply an insecticide to control these pests could have a big impact on native pollinator populations, according to a researcher from the University of Kentucky College of Agriculture, Food and Environment.

Jonathan Larson, a UK doctoral student, has found that when neonicotinoids, a type of systemic insecticide, are applied to flowering lawn weeds that are frequented by native bees, such as dandelions and white clovers, the chemicals can negatively impact local pollinator populations.

“With honeybee populations struggling, we need to rely on native bees, such as bumblebees, to pick up the slack on plant pollination,” said Dan Potter, UK entomologist and Larson’s adviser. “Many native bees are much more efficient at pollinating certain types of crops, like tomatoes, urban flowering plants and vegetables grown in home gardens.”

Larson’s research, published in the journal PLOS ONE, showed that exposure to clothianidin, a neonicotinoid insecticide, negatively affected queen production. It also slowed foraging and caused higher mortality rates in worker bees within five days after exposure at plots on UK’s Spindletop Research Farm compared to control hives. When moved to an untreated field to forage for six weeks, the bees had a hard time gaining weight compared to the controls. Bumblebees exposed to chlorantraniliprole, from a relatively new class of lawn insecticides, developed and reproduced normally compared to the control hives.

“We’re trying to figure out ways that people can safely use insecticides and not affect native pollinators,” Larson said. “One way may be for homeowners and commercial lawn care professionals to use the newer class of insecticide instead of a neonicotinoid to control common lawn pests. Another way could be mowing treated areas.”

He found that when clover flowers treated with an insecticide are removed by mowing and new flowers grew to replace them, neither insecticide adversely affected bumblebee colonies.

“Direct contamination of the flowers is the problem, so homeowners need to remove the flower heads of weeds either before or after applying an insecticide to prevent exposure to native pollinators,” Larson said.

Larson is now studying the level of insecticides present in the nectar of subsequent generations of clover flowers after the field has been treated with an insecticide and the treated flowers have been removed.

The entire PLOS ONE article is available here.

The original release and photos can be found here.