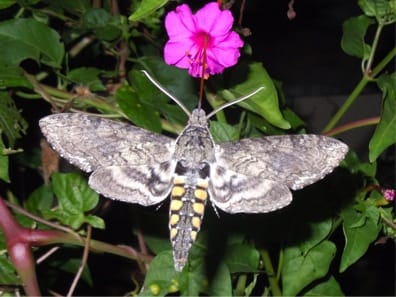 Remember that big green worm with the red horn on its tail that was eating your tomato plants in July? Well, over the last month it has burrowed into the soil, pupated, and emerged as a big moth that shows up after sunset and feeds from flowers at night.

The moths are called “hummingbird moths” because they look and act so much like hummingbirds, being able to hover over a flower and drink from it in flight. Also, like hummingbirds, they are fast fliers, zipping back and forth among blossoms. The moth’s tongue is actually longer than its body, allowing it to extract nectar from deep-throated blossoms.

These hummingbird moths, which are also called sphinx moths, can have wingspans up to 4 inches. The moths are gray with darker gray and black markings, and they have yellow or orange spots on the sides of their abdomens.

The moths’ larvae, those green caterpillars known as hornworms, feed on Solanaceous plants like tomato and tobacco. They have also been found on potato, eggplant and peppers, and they can thrive on these plants’ wild relatives such as jimsonweed, tropical soda apple and horse nettle.

The larvae are harmless to humans; the red horn on the rear end is flexible and cannot stick you. The best way to manage the pests is to be vigilant and pick each caterpillar off the plant as soon as you see it. Save it, and you can give it to a local schoolteacher for classroom demonstrations.

After the larva has fed to fullness, and is about 3 or 4 inches long, it crawls down into the soil and changes into the pupal stage. The pupa is distinctive in having a loop, almost like a shepherd’s crook, at one end; this is where the mouthparts of the adult moth form.

The reddish-brown pupa will remain underground until next spring when the adult moth will emerge from the pupal skin, through the soil and start the cycle all over again. If your garden is already planted when these moths emerge in the spring, they may lay their first batch of eggs on your young tomato plants, so keep an eye out for hungry caterpillars.