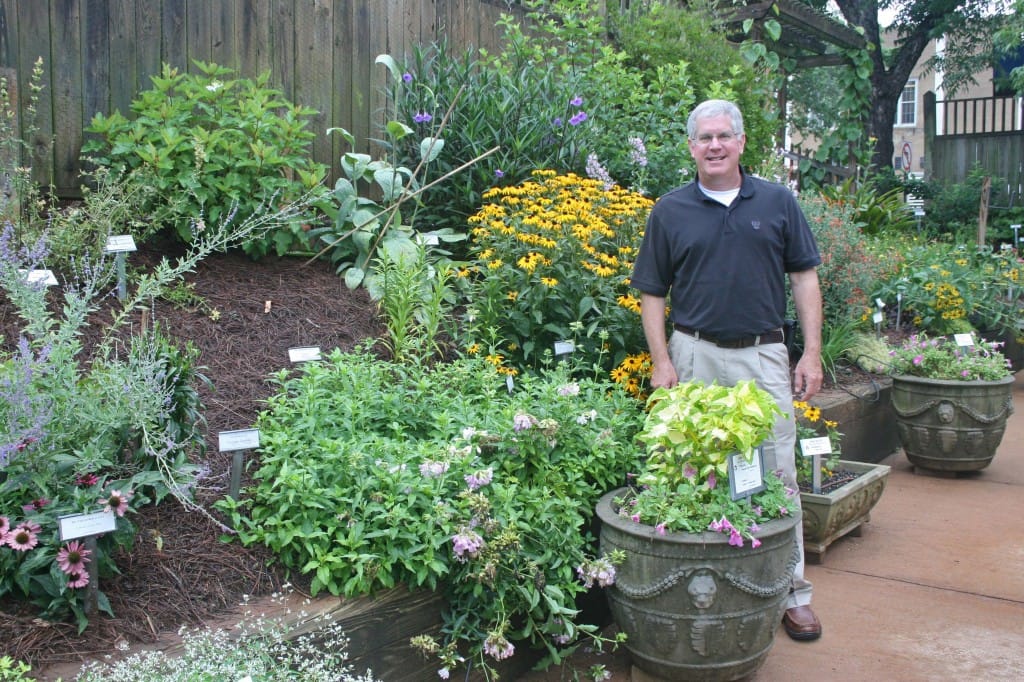 After 30 years, the Trial Gardens at UGA — that green, flower-laden oasis sandwiched between Snelling Dining Hall and the College of Pharmacy — is being tended by a new green thumb.

UGA Department of Horticulture professor John Ruter took over the day-to-day operations from garden co-founder Allan Armitage on July 1. Armitage is officially retiring at the end of 2013. He originally retired in 2010 and came back halftime.

Ruter has spent more than two decades as a horticulture professor and a nursery crop research and Extension specialist on the UGA Tifton campus, where he also ran the Coastal Plain Research Arboretum.

He moved to the Athens campus in 2012 after he was awarded the Allan M. Armitage Endowed Professorship for Herbaceous Plant Instruction and Introduction. He now teaches classes in plant identification and environmental issues in horticulture.

Ruter doesn’t want to rustle too many leaves as he eases into his new role, but he does want to spruce up the garden a bit — mostly planning changes to attract new visitors, allow it to run more efficiently and be used for more horticulture classes.

“I’m just starting with it, but I do have lots of ideas,” Ruter said.

While the Trial Gardens serves as a testing ground for new plant varieties, it’s also an integral part of the UGA Department of Horticulture’s teaching and research programs. It’s important to Ruter to maintain all the facets of the garden’s mandate.

Plant nurseries and breeding companies send hundreds of new plants each year to see if they can survive the hot and rainfall variable Southeast. They fund the garden by paying to have their plants evaluated by an outside source. That money pays for the gardens’ upkeep and a team of student workers who keep the garden running.

While providing an important link with the green industry, the garden is also a research lab, where Ruter will work with graduate students to develop new plant varieties, and a classroom for plant identification and other horticulture courses.

Ruter plans to make the garden more useful as a teaching tool by planting more perennials and annuals that bloom in fall and early spring when classes are in session. This will also be good for the entomology, plant biology, plant pathology, landscape architecture and visual arts instructors who also use the garden as an outdoor classroom.

“We’re still going to get some perennials in there for evaluation, and they will always be there,” Ruter said. “We will always have a majority of summer blooming plants, but maybe we can have some other things that we can use for teaching purposes and that can help make (the garden) a little more showy other times of the year — rather than just during the summer.”

Planting for a more diverse blooming schedule will also bolster the garden’s reputation as a destination — both for visitors to the Classic City and for Athens’ residents. Support on-campus and from the general public will be integral to maintaining it as green space on campus for decades to come, Ruter said.

Like in every other part of the university, Ruter, Meg Green (Trial Garden supervisor), and her team of student workers and volunteers are operating within tighter budget constraints.

“We’re trying to make some renovations to the perennial gardens and work on efficiency,” he said. “How can we do things differently with the limited resources that we have?”

The garden will remain open to the public on a daily basis and continue its schedule of public and industry open houses throughout the year. Those seeking more information about the garden can visit ugatrial.hort.uga.edu.

(Merritt Melancon is a news editor with the University of Georgia College of Agricultural and Environmental Sciences.)