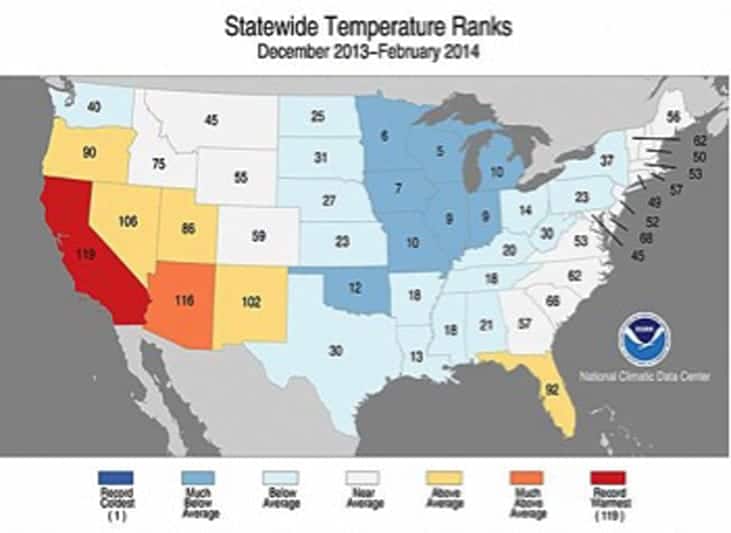 Despite some bone-chilling days with single digit lows, Georgia’s winter was about average in both temperature and precipitation.

This winter, which climatologists define as Dec. 1 to Feb. 28, was actually the 57th coldest out of the past 119 winter seasons. This means that 56 years were colder than the 2013-2014 winter season and 62 were warmer. This places it just about right in the middle.

Georgia’s winter precipitation was ranked 67th out of 119 years, which means that 66 years were drier and 52 were wetter.

This was the first time that such cold temperatures have been observed in Georgia since the winter of 1995-1996. Periods of very cold weather were more frequent in the 20th century than in recent years.

The winter conditions provided plentiful chill hours for peaches across Georgia. The fruit should be in great shape as long as a late frost after blooming does not hurt the development of the peaches this spring.

Cold conditions have reduced the average size of Vidalia onions this year as well as cut stands by up to 25 percent. Overall, however, supplies are considered to be very good.

Lawns in north Georgia with warm-season grasses like centipede may see some damage due to some of the extreme low temperatures.

Some insect pests may have been cut back by the cold weather, but many are well adapted to shelter in the coldest conditions and the rapid swings in temperature may not have provided long enough cold conditions to cause a significant dent in their populations.

Other impacts from this winter’s weather include the damage to timber in the mid-February ice storm. The ice caused widespread power outages and tree damage to north central and eastern Georgia, particularly in the Augusta area.

While the state is starting to shake off the chill of the last few months, Georgians can expect cooler and wetter than normal conditions across Georgia for the next two weeks, based on predictions from the Climate Prediction Center, NOAA.

Gardeners should also remember that a late frost is still possible and perhaps more likely than in other years because the state is in a neutral weather pattern — one not affected by La Nina or El Nino.