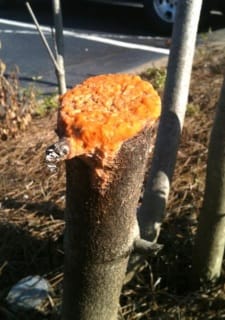 I’ve been getting some calls and emails about “orange goo”  growing on cut hardwood stumps. It is weird, interesting and looks like an attack of ‘the blob” (see the image to the right). So, what causes the orange goo?

It’s the yeast, Cryptococcus macerans, growing on the sugary sap flowing from the cut branches or trunk. A few other fungi can also be found mixed in, including some species of Fusarium and Acremonium. The yeast is harmless to the plant; it is just growing on the sap.

The orange color comes from the pigment carotene, which is the same pigment that colors carrots orange. Some strains of Cryptococcus macerans could cause disease in humans, so if you can’t resist touching it, wash your hands! Generally though, it is harmless and just another interesting oddity in the fungal world.