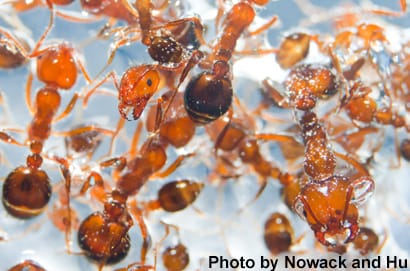 Flooding has been a problem in central Texas and occasionally in parts of Georgia. Floods impact fire ants, but perhaps not like we would wish or think!

Red imported fire ants live in the soil.  What happens to them when we have flooding?  Many people may think that they will drown in the flood water.  Unfortunately this isn’t true.

When fire ant colonies are flooded, the ants form living rafts by clinging together.  They float along the water surface until they hit dry ground, a tree, rock or other dry object.  Once they come into contact with a dry area, they emerge from the flood waters and take shelter anywhere possible until they can re-create a colony in the soil.  Living rafts of fire ants can take on different shapes from long ribbons to mats to a ball of ants.

Any floating mats of fire ants that are encountered should not be touched or disturbed.  Do not touch them with sticks or other objects as the fire ants will quickly grab onto the object. If working in flooded areas, make sure to wear appropriate clothing.  Long sleeves, pants and gloves will create more of a barrier against fire ants reaching skin where they will bite and sting.  Be aware that fire ants could be hiding anywhere that was flooded.  Wear gloves when picking up debris or other objects.  You may want to spray insect repellent containing DEET on your shoes and pants.

If you encounter fire ants in debris, use a fast-acting contact pesticide labeled for ants, but make sure the products are not sprayed into water as they can be toxic to aquatic organisms.  Fire ant baits should not be used after flooding because many of them are slow acting and colonies will be disorganized and not foraging for food.

Also be aware that fire ants may be showing up in areas that may have not had them previously or areas that were treated.