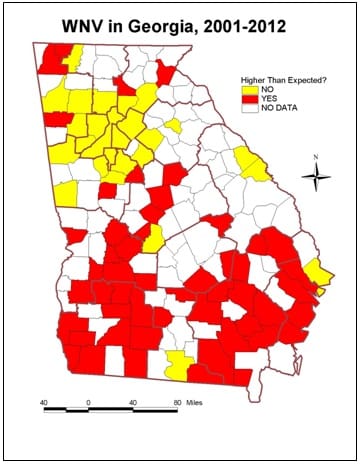 Answer: This study indicated that people in areas with no mosquito control program had a tenfold greater risk of WNV than those in areas where mosquitoes were controlled. Mosquito surveillance is an important component of any mosquito control program.  Where arboviral diseases occur, mosquito testing is an equally important component of an arboviral surveillance program.  Arboviral encephalitis can be prevented in two major ways: personal protective measures to reduce contact with mosquitoes and public health measures to reduce the population of infected mosquitoes in the environment (mosquito control).  Analysis of surveillance data provides information about the timing of arboviral transmission and the risk to the public, which can trigger county-level educational programs to help reduce risk.

A study comparing two mosquito control districts showed that the program with the most mosquito surveillance and best documented larviciding and adulticiding operations had the fewest number of WNV cases.  This study indicated that people in areas with no mosquito control program had a tenfold greater risk of WNV than those in areas where mosquitoes were controlled.

What are the roadblocks to arboviral surveillance in Georgia?  We really do not have enough data to do good predictive calculating, particularly at the State level.  Predicting where and when WNV outbreaks will occur is difficult, especially in areas with endemic transmission, which is what occurs in Georgia.  Most of our sentinel data do not match up with our case data, as counties doing mosquito surveillance are not necessarily the same counties where human cases are occurring.  Culex quinquefasciatus (Southern house mosquito), our primary WNV vector, are not evenly distributed, so neither is risk of human cases.  However, we do not have sufficient surveillance to know where risk is occurring, and maintaining mosquito monitoring systems is costly even though it is essential according to the CDC.

Where data are available, the best predictor of risk is the Vector Index, the minimum infection rate (MIR) times the number of mosquitoes per trap night (abundance), which provides 2-4 weeks lead time in advance of human cases. Where adequate surveillance is maintained, this gives sufficient lead time to implement adult mosquito control efforts, which have demonstrated success in reducing human risk, resulting in fewer WNV cases (Carney, 2008).