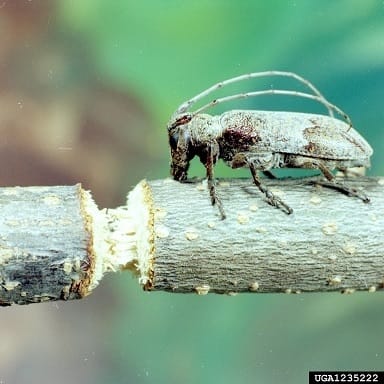 Q:  Something is chewing off the ends of branches on some of my trees.  I go out every morning and there are three or four more on the ground.  The leaves are nice and green on the fallen branch.  Is it squirrels or could it be something else?

A:  What you are seeing is twig girdler damage.  This is a long horned beetle (so named because his antennae’s are longer than his body). It is a pest of pecan and hickory, but may also attack persimmons, hackberries and other hardwood trees.

The nature of the girdle itself distinguishes the twig girdler from other branch pruners and why I can tell it’s not a squirrel. The cut by the twig girdler is the only one made from the outside of the branch. The cut end of the branch looks like mini beaver damage. Since the twigs are girdled while the leaves are present, the severed twigs retain the leaves for some time.

The adult beetles girdle twigs and small branches causing the ends to break away or hang loosely on the tree. It is not uncommon to see the ground under infested trees almost covered with twigs that have been cut off. The female lays her eggs in the tips of the branch then chews around the branch leaving a little wood attached in the center.  This breaks off in the wind.  If you look closely on the fallen branch you will see tiny holes where the eggs were laid.  The holes will usually be by a bud scar or near a side shoot.

They aren’t hurting the tree unless you had a pecan orchard, then the loss of branch tips could reduce nut production in the following few years.  Most girdled twigs are from 1/4 to 1/2 inch (occasionally up to 3/4 inch) in diameter, and 10 to 30 inches long.

The best control is to pick up the twigs and discard them as the larvae develop and pupate in them.  Insecticide is rarely justified or practical.