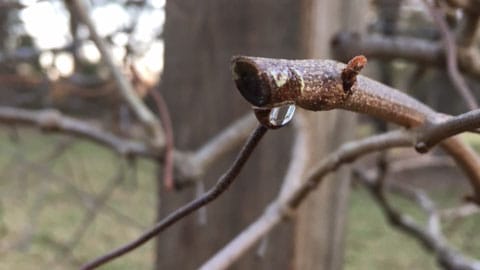 Following a late winter or early spring pruning of Maple, Birch, Elm, or Grapevines it is common to observe “bleeding” from the pruning wounds.  This phenomenon usually occurs just before and during leaf emergence in the spring, especially during years of abundant soil moisture.  The temporary bleeding is generally not detrimental to the health of the plant and primarily consists of a watery sap solution. The bleeding usually ceases once the leaves have fully emerged and water begins to evaporate through the leaf stomata, creating transpirational pull that overshadows the root pressure.

Occasionally, bleeding can be a nuisance where these plants drip on parked cars and pedestrian spaces.  In such cases, delay pruning of these species until late spring-early summer to help to reduce the issue.

If prolonged bleeding occurs and you observe any unusual signs or symptoms of pests or disease, report the information to your local extension agent for further assessment.

Greg Huber
Training Coordinator at Georgia Center for Urban Agriculture
Greg administers the Georgia Certified Landscape and Plant Professional programs through the Georgia Center for Urban Agriculture. His diverse background in the industry includes landscape management, retail nursery sales, landscape installation, site planning, and landscape architecture. He is the recipient of the Georgia Green Industry Association (GGIA) Communicator of the Year Award (2019),the GGIA Educator of the Year award (2015) and the Southern Crescent Technical College Rick Perkins Award for Excellence in Technical Instruction (2012).

Mr. Huber is a Georgia Registered Professional Landscape Architect. Greg is active in professional, educational, and community clubs and activities. He brings enthusiasm, passion, and expertise to every one of his program areas.