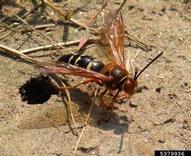 Female cicada killers are hard to provoke to sting.  The female uses her stinger to paralyze her prey (cicadas) rather than in self defense. The female’s attention is focused on providing food for her babies, so she poses little threat to humans.

Cicada killers prefer to nest in sandy open sunlit areas.  As the female digs, she kicks out soil that forms a semicircle around the burrow opening. She burrows six to ten inches into the ground, prepares a chamber, catches a cicada to fill the chamber, lays an egg on the cicada, and seals the chamber.  She may do this over a dozen times in one burrow.

When a female finds a cicada, she paralyzes it with her stinger, straddles it, and attempts to fly with it to her burrow.  Because the cicada typically weighs more than she does, these flights are usually hops, with more dragging than gliding.

The egg hatches in a few days and the larva feeds on the paralyzed cicada until nothing is left but a shell. Then the wasp larva pupates within the burrow, remaining there until the next spring.

Males cannot sting; their only defense is intimidation.  They patrol the nesting area, trying to divert attention away from the female, allowing her to provision her nest with cicadas.  Meanwhile the male is using threatening tactics to distract potential predators. He may even dive bomb perceived threats.  Since the males do not have stingers, they are completely harmless.  They must rely on bluff, bluster, and bravado to protect their families.

Because cicada egg laying can be damaging to trees and shrubs, cicada killer wasps are very beneficial, providing free biological control.  However, homeowners who do not want these wasps around can modify their lawn to be unappealing.  A thick healthy turf with no bare spots will exclude cicada killer wasps. If turf is thin in nesting areas, identify turf problems that make the turf weak and correct them.

Cicada killer wasps will be active for only a few weeks and will be gone by mid-August in most of Georgia. If someone is bothered by these wasps, late July and early August would be a good time to take their vacation.

For more on cicada killer wasps, see these articles:

Giant wasps not after humans