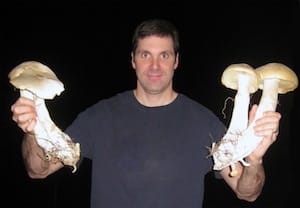 Macrocybe titans is the largest gilled mushroom of any species in the Western Hemisphere, with caps in excess of 100 cm (3 ft). These giant mushrooms often occur in clusters within the tropics and subtropics of the New World, with previous sightings reported in the Caribbean, Central America, Mexico, South America, and only in Florida within the USA. Confirmation of this species in Georgia now extends the previously known range of M. titans. To our knowledge, this is the first report in Georgia. The mushrooms were discovered in October 2012 in the yard of an abandoned house in Athens. The fungus was identified as M. titans based on morphological features, habitat where it was found and DNA sequence similarity with known specimens.

The large, cream to buff-colored mushrooms were found growing in three large, dense clusters of eight to 10 mushrooms each (Figure 1). Single caps were 20-30 cm (8-12 in) across and convex with incurving at the margin. Younger mushrooms (Figure 2) had more convex caps than those of older specimens that became flattened with age. The smooth, dry surfaces of the caps were cinnamon-buff in color at the crowns fading to cream toward the margins. The inner flesh of the caps was white. The spore print, which was obtained by placing a cap on half white and half dark-colored paper and covering it with a bowl overnight, was creamy white (spore prints are necessary for proper mushroom species identification).

The mushrooms of M. titans, like the fruiting bodies of any fungus, are the reproductive structures where the spores are produced. The majority of the fungus is actually growing as filamentous hyphae underground and out of sight in decomposing dead and decaying plant matter in the soil. The three nearby clusters that were observed likely came from a single individual growing in the soil beneath the tall grass. M. titans is saprotrophic, which means that it decomposes dead or decaying plant matter and does not cause disease or rot on living grasses or trees.

It is not clear why or how this fungus found its way into Georgia. The mushrooms were close to landscape ornamental grasses and it may have arrived with the container plants, as Florida is a large producer of ornamental landscape plants. Or, it may be expanding its geographic range into Georgia due to climate warming or some other factor. This species was previously known as Tricholoma titans, but in 1998 was renamed Macrocybe titans, which literally translates from Latin into “giant large head.” The mushrooms are reportedly edible; however, never consume a wild mushroom without identification confirmation by an expert. Contact your county Extension office should you happen to encounter the giant mushrooms of M. titans.

We thank Kirk Edwards for discovering these mushrooms and contacting us about their identification.