The most common cause of accidents is kickback. Kickback occurs when the top quarter of the saw blade, also known as the kickback zone, contacts a solid object (wood or metal). Because the cutter is coming down the edge of the saw bar in the kickback zone, the depth gauge is lower than it should be in relation to the tooth. Literally, the saw bites off more than it can chew, stopping or slowing the chain. The result is a rotational force that flings the bar backward, into the operator. When the bar rears back, the chain break will be activated and stop the chain in 1/55th of second. The saw may still strike you, but the chain is not rotating and the damage will not be as severe.

DO NOT USE THE KICKBACK ZONE AND ALWAYS BE AWARE OF ITS LOCATION!!! 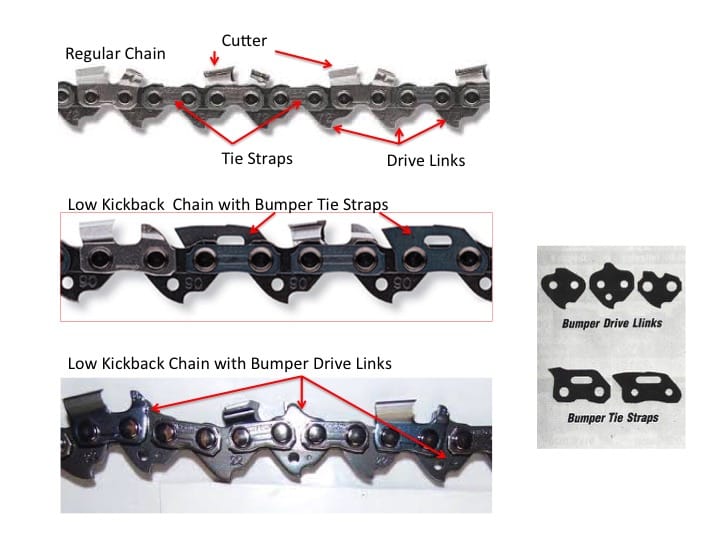 The depth gauge sets the depth or thickness of the chip produced by the cutting corner of the cutter. The depth gauge is an important safety feature. The thicker the chip, the more severe the potential kickback. By regulating chip size, depth gauges also regulate the severity of reactive forces.

She currently coordinates national and statewide urban programs in water issues, safety training, turfgrass, Integrated Pest Management, and arboriculture. Prior to joining the Center for Urban Agriculture she helped create AWIS Weather Services and served as Executive Vice President and Director of Marketing of that company for seven years.

She holds a M.S. and a Ph.D. from the University of Illinois in Plant Pathology and a Bachelor’s degree from Cornell College. Dr. Bauske has had the great pleasure of working in plant breeding, biological control, Integrated Pest Management, and Extension.