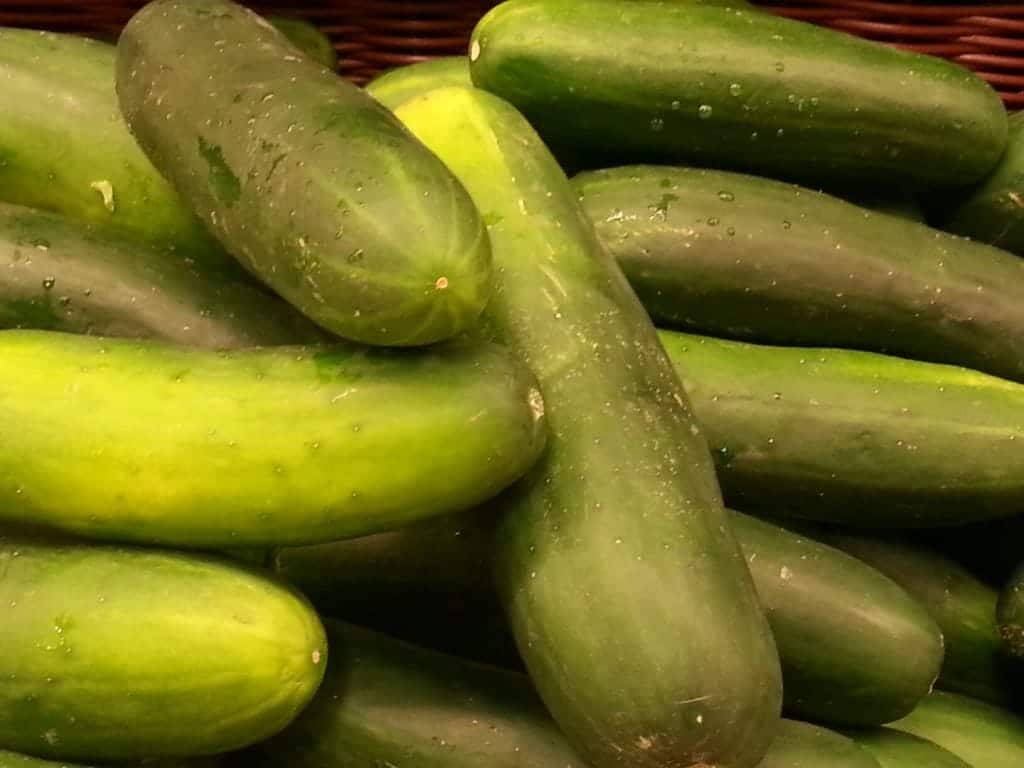 Fresh slicing cucumbers are a favorite summer crop.   Extension Horticulturist, Robert Westerfield, has written a helpful circular called “Growing Cucumbers in the Home Garden” that will get you started.

Slicing cucumbers may have long vines.  With proper planning, and a few tips, you can have manage cucumber vines in the community garden.  There are a few cultivars that are bush-type cultivars, meaning they won’t take as much space.  Salad Bush Hybrid is advertised to take up about 1/3rd the area of a traditional vining cucumber.  Bush Crop and Fanfare are also commonly grown bush cucumbers.  Realize that they will still have some vines.

If you want to try the vining cultivars you can stake or trellis them.  Wire-grid growing panels are perfect for cucumbers.  Or, recycle a portion of fencing. Trellising cucumbers has the added advantage of getting the fruit off of the ground which helps prevent fruit rots.  This also allows for increased air flow around the plant leaves which may cut down on disease problems.  Be conscientious of your fellow gardeners by not creating unwanted shade for your neighbor with your trellis.

Depending on how large your cucumber fruit matures, it may need support on the trellis.  Old panty hose or onion bags are perfect for this.  As the fruit becomes big, gently cup the cucumber in the hose or onion bag and tie it to the trellis.  Be careful not to bruise the fruit or tear it from the vine.  Burpless hybrid, Straight Eight, Sweet Success, Sweet Slice, Diva, and Marketmore 76 are good vining cultivars for Georgia.

Community gardeners list past poor fruit quality as a reason not to grow cucumbers.  If you know a bit about the biology of the cucumber plant you might have better success.  Cucumbers have two kinds of flowers.  They have male (staminate) and female (pistillate) flowers.  Staminate flowers do not bear fruit. Bees move pollen from staminate (male)  flowers to the

pistillate flowers for pollination and subsequent fruit production.  This means if you, or your fellow gardeners, are using broad-spectrum insecticides you may be reducing the quality and quantity of your cucumbers by killing possible pollinators.  It is possible to hand pollinate cucumbers if you see few bees.

You may have heard of gynoecious cucumbers. These produce mostly female flowers.  They often have a heavier yield because of the increased number of female flowers. I’ve seen posts around the web suggesting that the few male flowers be removed.  Don’t do that!   It takes male and female cucumber flowers to make fruit!  General Lee and Calypso are two gynoecious types worth a try.

Be bold and try cucumber planting.  Your salads will be the better for it!  For more information on growing cucumbers with success contact your local UGA Extension Agent.

3 thoughts on “Give Growing Cucumbers a Try”