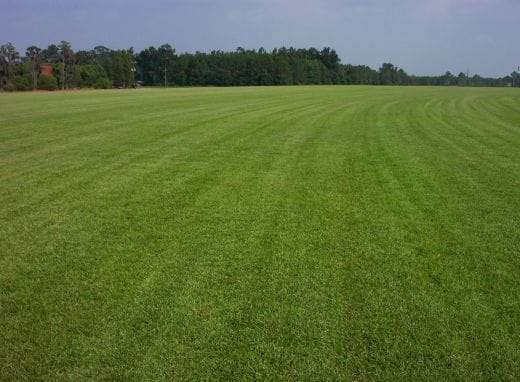 Sharon Dowdy is a news editor with the University of Georgia College of Agricultural and Environmental Sciences.

Lawns in Metro Atlanta and north Georgia counties covered in warm-season grasses like centipedegrass or St. Augustinegrass will likely show signs of cold damage this spring as a result of the recent snow and ice storms, says University of Georgia Extension turfgrass specialist Clint Waltz.

“The temperatures were down in the single digits for 60 hours, so we are likely to see some losses, especially in common centipedegrass. Also, there is a lot of St. Augustinegrass in Atlanta, especially in shady areas. You’ll be able to see (the cold damage) when it doesn’t green up this spring,” said Waltz, a scientist in the UGA College of Agricultural and Environmental Sciences. “There’s still a little bit of a question mark about lawns in south Georgia.”

Homeowners and landscapers caring for common centipedegrass should not “be surprised to see it come out thin and spotty,” this spring he said. “It’s going to take a some work to get it back into shape over the summer growing season.”

Centipedegrass and St. Augustinegrass have no below ground rhizomes. They grow above the ground through stolons, or runners. This makes recovery and regrowth of these species more difficult.

Waltz says homeowners can choose to turn the cold damage into an opportunity for change.

“With the potential loss of some centipedegrass and St. Augustinegrass, this would be the year to consider converting your lawn to something more cold hardy like zoysiagrass. Then you won’t have to worry about every ninth year when we get a very cold winter,” he said.

For those who decide to change to a new turfgrass variety, Waltz recommends cold hardy UGA-bred TifBlair centipedegrass or a zoysiagrass variety. “Zoysiagrass is pretty cold hardy species. I’d be surprised to see it damaged,” Waltz said.

Time will tell for bermudagrass

Waltz is unsure what’s ahead for homeowners with bermudagrass lawns. “If you could tell me what the weather is going to be like, I can tell you how the grass is likely to recover,” he said. “If the weather warms up and stays warm, then bermudagrass will probably be fine, but if we get another snow or if it drops down into the teens after we have 30 to 50 percent green-up, the cold snap will cause the grass to go dormant, and it is possible it won’t green-up again.”

Warm temperatures tell the grass it’s springtime, but when temperatures drop, the plant doesn’t know how to respond, he said. If early April brings 65 degree temperatures, the grass will begin to sprout. If a late frost occurs, the new “succulent grass tissue” can be lost, Waltz said.

“Tifway is not a particularly cold hardy cultivar of bermudagrass. TifSport, TifGrand and Patriot are and will likely do fine,” Waltz said.

Homeowners can help their bermudagrass lawn by doing nothing.

“After the cold we’ve had, there is really nothing you can do. Just let (the lawn) green-up on its own and don’t fertilize it,” he said.

Don’t listen to the commercials

“Don’t listen to the marketing when they say ‘Now is the time to fertilize,'” Waltz said. “When we get into March Madness and you start hearing the personalities that know sports but don’t know about turfgrass tell you to fertilize your lawn, disregard all that.

“Clint Waltz is telling you that when it comes to warm-season grasses hold off on that first nitrogen application until late April or early May,” he said.

Bermudagrass, centipedegrass, St. Augustinegrass and Zoysiagrass should be fertilized when the soil temperature is consistently 65 degrees and rising at a 4-inch soil depth, he added. Usually this is late April or early May in Metro Atlanta.

For more on turfgrasses in Georgia, see the UGA Extension website www.GeorgiaTurf.com.