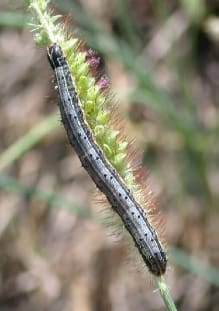 In late summer, almost every year, caterpillars invade turfgrass throughout Georgia. The damage to established turf is mostly aesthetic, but newly sodded or sprigged areas can be more severely damaged or even killed. While there are several caterpillars that can damage turfgrass, in late summer most of the problems are from fall armyworms.

Hot, dry weather can intensify fall armyworm problems when egg-laying adults concentrate their eggs in irrigated, green turf.  At least some cultivars of all warm season grasses are susceptible.  Cool season grasses like tall fescue are very favorable for fall armyworm growth and development too, and do not regenerate as readily as the stoloniferous grasses.

Fall armyworm adults migrate northward every year from southern overwintering areas.  Adult armyworm moths are active at night and females lay eggs in masses of 50 to several hundred.  These night-flying moths are attracted to lights and to lighter colored surfaces.   Egg masses on structures around turf (eaves and gutters, fence and porch posts, flags on golf courses) and even on taller foliage plants can be the first indicators of incipient infestations.

Eggs hatch in a few days, and the young larvae begin to feed on leaf tissue.  Damage from small larvae may at first look like skeletonizing, but as the worms grow, the entire leaf is consumed.  Small larvae at this time are easier to control and have inflicted less damage than full grown (35-50 mm long) larvae.  Full grown larvae will soon pupate in upper soil/thatch layer and will not be susceptible to insecticides at this point.

Armyworm larvae are most active early and late in the day, spending the hotter hours down near the soil in the shade. Larvae feed for 2 to 3 weeks before pupating in the soil.  Moths emerge 10 – 14 days later.  The entire life cycle from egg to adult moth takes about 28 days in the warm weather of August and September.

If there is any doubt about whether worms are present, pouring soapy water on the grass (1/2 oz. dishwashing soap/gallon water) will bring them up very quickly.  Heavily infested turf will also have visible greenish-black fecal pellets on the soil surface.  Other indicators of armyworm infestations may include birds or even paper wasps that use the fall armyworms as food.

Control of armyworms and other turf caterpillars is relatively simple once the problem is identified.  There are several pesticides from which to choose depending upon the site you are treating. Consult the UGA Pest Management Handbook or your local Extension Agent for recommendations. Read and follow all label directions when using pesticides.

Armyworms are most active late in the day and at night, so pesticide applications should be made as late as practical for best results.  It is not necessary to water after application but an application rate of 20 – 25 gallons of solution per acre as a minimum will ensure good coverage. Cutting the grass prior to application may improve control, but do not cut grass for 1 –3 days after application.

In addition to the birds and paper wasps mentioned above, a number of other insects feed on armyworms, including tiger beetles and other ground beetles.  Fall armyworms, like many other turf infesting caterpillars can also be heavily parasitized by tiny wasps that kill the caterpillars and cause no harm to humans or pets.  These natural enemies can be conserved by spot rather than blanket spraying and properly timing control efforts.