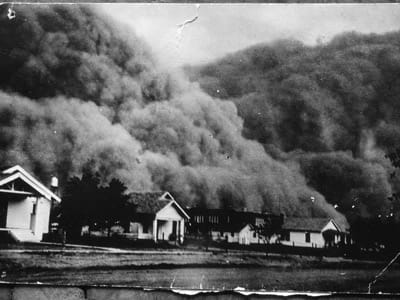 Eighty years ago, April 14, 1935, an ominous wall of blowing sand and dust swept across the Great Plains. This day is known in history as Black Sunday. During the 1930’s, the Dust Bowl days were a period during which huge dust storms ravaged the Midwest because of years of overplanting, poorly managed crops and severe drought conditions. During that massive storm, people were forced to crawl on hands and knees in search of shelter, literally unable to see their hands in front of their faces. Cars stalled and stopped in the choking dust. Many thought the end of the world had come.

Legacy of the Dust Bowl

In response to Black Sunday, and the damage caused by dust storms, Congress passed Public Law 74-46 on April 27, 1935, and recognized that “the wastage of soil and moisture resources on farm, grazing, and forest lands… is a menace to the national welfare.” This law established the Soil Conservation Service, now USDA’s Natural Resources Conservation Service, or NRCS. Since that time, our commitment to soil science and soil health has helped America’s private landowners implement conservation practices that protect and improve soil and other resources.

Healthy soils are the foundation of agriculture (and landscaping – editor’s note). In the face of mounting challenges, soil health is critical to our future.

As America’s agency for soil conservation, classification and studies, NRCS is excited that 2015 will bring worldwide attention to the importance of soil. During the International Year of Soils, and on Earth Day 2015, we have lots to celebrate. Thank you to the farmers, backyard gardeners and all of our nation’s conservationists who are doing their part to protect natural resources.

We salute the soil, and we hope you will too.