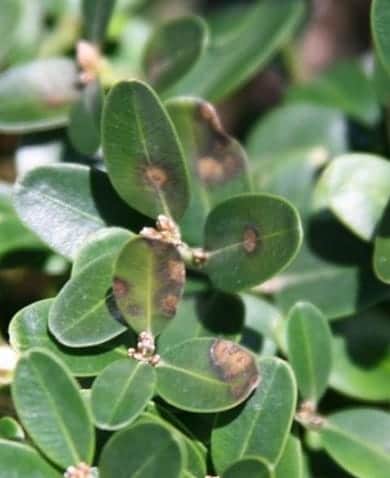 Boxwood Blight is caused by the fungus, Cylindrocladium pseudonaviculatum, which causes leaf spotting, stem dieback, and death of almost all cultivars and species of boxwood. The disease moves quickly through infected plants, gardens, and nurseries.

It has been identified in 12 states (CT, DE, MA, MD, NC, NJ, NY, OH, OR, PA, RI, VA) and three Canadian provinces, and it is causing significant damage to boxwoods in those states, some in landscapes while others are restricted to nurseries. The pathogen also infects pachysandra (ground spurge) and causes similar leaf spots and stem dieback.

To date, Boxwood Blight has not been found in Georgia. However, introductions are possible on infected plants or on boxwood tip cuttings originating from out-of-state nurseries and suppliers.

Tan, circular leaf spots with a dark brown border develop within two days of inoculation. This is followed rapidly by the entire leaf turning brown, black lesions developing on the stems, and plant defoliation (see images). In some cases, time between leaf spot symptoms to plant death was two weeks.

This is a very damaging disease that you do not want in your nursery or landscape. The fungus produces white tufts of spores on the leaves and stems. The spores are very sticky and they will stick to pruning or digging tools, worker’s pants and hands, and dogs or other animals that may walk next to infected plants. In NC, wild turkeys were suspected of spreading the disease within field-grown boxwoods.

There is no control for this disease once it is present. The only control is preventing its introduction and preventive fungicide applications to protect non-infected plants.

Cylindrocladium diseases are difficult to manage with fungicides. Dr. Kelly Ivors at NCSU has conducted some fungicide trials against boxwood blight and has found that fungicides containing chlorothalonil (Daconil, Spectro, Disarm C, Concert II), fludioxonil (Medallion, Palladium) or tebuconazole (Torque) provided the best control when applied preventively. However, most of these products are either not labeled for control of Cylindrocladium or for use on boxwood or both. Pageant (pyraclostrobin and boscalid) is labeled for both boxwood and Cylindrocladium disease and provided fair to good preventive control. There is a great need for fungicide labeling changes and additions for this disease. Currently, fungicides are only needed in high risk areas where Boxwood Blight is known to occur. Spraying plants after the disease is present will NOT control this disease. Curative applications are ineffective.

If the disease is detected, the infected plants and all of its fallen leaf debris needs to be bagged on-site and removed from the area to be burned or buried to prevent its spread. In nurseries, propane torches have been used to burn any remaining leaf debris to rid the area of the pathogen; however, this may not completely control this disease.

The fungus also produces microscelrotia within roots and leaf debris of infected plants. Microsclerotia may allow the pathogen to remain viable at the site for years. Not to sound like an alarmist (but I have to here!), if I was in charge of a boxwood planting (box garden, topiary garden, historic plantation garden, nursery production, etc.), I would not bring in any boxwoods from anywhere. I would do all propagation in-house. You may think you are buying plants originating from a “safe” nursery, but in reality it could be a brokered plant that originated from an area where boxwood blight is present.

I also would not allow anyone to prune, shear, take tip cuttings, or touch my boxwoods if they have worked on boxwood somewhere else previously without first disinfecting their tools and changing their clothes. I’d rather make someone angry today, then for me to cry later because all my boxwoods are dead. Bottom line: You won’t get this disease if you don’t bring in any boxwoods. The spores are not wind-borne; they are water-splashed and carried on plants, people, tools, and animals. If you do bring in boxwood plants, make sure they come from a nursery certified to be free of Boxwood Blight.

Dr. Ivors has also conducted a Buxus cultivar susceptibility trial. Buxus sempervirens cultivars (English, American, Justin Brouwers, etc.) tend to be more susceptible. Buxus microphylla cultivars tend to be more tolerant of the disease; however, all cultivars can be infected. In fact, more tolerant cultivars could look asymptomatic, yet carry the pathogen (i.e. be a ‘ Typhoid Mary’), and spread the disease to surrounding susceptible plants. The value of cultivar susceptibility testing is in the establishment of new boxwood hedges. If planting a new area, use a more tolerant cultivar to lessen your disease pressure in subsequent years. See http://plantpath.cals.ncsu.edu/ornamentals for more information on Boxwood Blight and links to Dr. Ivors’ research trials.