These diseases are often the most severe diseases for cool-season grasses, especially on tall fescue and ryegrass.

Pythium blight has the potential to cause significant damage to turfgrass quickly. The disease starts as small spots, which initially appear dark and water-soaked. Affected turfgrass dies rapidly, collapses, and seems oily and matted. White, cottony mycelia may be evident early in the morning.  The disease is driven by hot-wet weather, which correlates with increased stress on the turf. Similar environmental and cultural factors that encourage brown patch also promote Pythium. Therefore, cultural practices for control of brown patch will also help to minimize Pythium blight development. A correct diagnosis is essential because Pythium control requires specific fungicides.

Several fungicides are available for each of the diseases described above. Consult the Georgia Pest Management Handbook or the Turfgrass Pest Control Recommendations for Professionals (www.georgiaturf.com) for proper fungicide selection and usage. Read the label and follow proper guidelines. 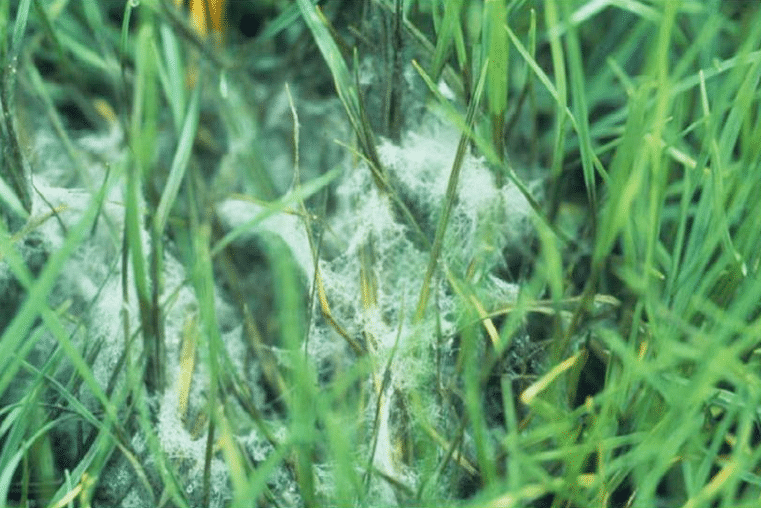 Brown patch can cause a foliar blight, which results in necrotic leaves and circular brown patches up to 4-5 ft in diameter. High soil and leaf canopy humidity, and high temperatures increase disease severity. Higher than recommended rates of nitrogen in the spring promotes disease. Management options include: avoid nitrogen application when the disease is active, avoid infrequent irrigation and allow the foliage to dry, mow when grass is dry, ensure proper soil pH, thatch reduction, and improve soil drainage.

For more information on Brown patch and Pythium visit http://extension.uga.edu/publications/detail.html?number=B1233

Gray leaf spot (Figure 2) is a fungal disease that affects St. Augustinegrass, perennial ryegrass and tall fescue in Georgia. The disease is particularly aggressive in St Augustinegrass. Hot, humid summer weather and high nitrogen levels can make turf susceptible to this disease. The fungus causing the disease is Pyricularia grisea.

Symptoms: The symptoms of gray leaf spot vary depending on the grass cultivar. On St. Augustinegrass, gray leaf spot first appears as small, brown spots on the leaves and stems. The spots quickly enlarge to approximately ¼ inch in length and become bluish-gray and oval or elongated in shape. The mature lesions are tan to gray and have depressed centers with irregular margins that are purple to brown. A yellow border on the lesions can also occur. In cool-season turfgrass, the symptoms are similar to those of melting out.

Conditions Favoring Disease: Gray leaf spot is favored by daytime temperatures between 80ºF to 90ºF and night temperatures above 65ºF. It is also found in areas with high nitrogen levels and that are stressed by various factors, including drought and soil compaction. This disease is most severe during extended hot, rainy and humid periods.

Proper mowing practices are most important for gray leaf spot management in St. Augustinegrass. This grass must frequently be mowed during the summer months to remove excess leaf tissue and keep the canopy open and dry. Mow the turf at the correct height for the designated turfgrass species and remove only one-third of the leaf blade per mowing. Collecting clippings reduces the spread of the disease when gray leaf spot symptoms are evident. Thatch layers should be removed if they are greater than 1 inch in depth.

St. Augustinegrass is especially sensitive to some herbicides. If possible, manage weeds using cultural management techniques and minimal amounts of herbicides. The timing of any atrazine application should be chosen carefully, as this herbicide can stress the grass, especially when temperatures may climb above 85 degrees F. Atrazine applications made before or during disease-favorable conditions increase the likelihood of severe gray leaf spot symptom development. Spot-treating trouble areas with the herbicide may also be considered. Herbicides should always be applied according to the label instruction

The symptoms of gray leaf spot vary depending on the grass cultivar. On St. Augustine grass, gray leaf spot first appears as small, brown spots on the leaves and stems. The spots quickly enlarge to approximately ¼ inch in length and become bluish-gray in color and oval or elongated in shape. Mature lesions are tan to gray in color and have depressed centers with irregular margins that are purple to brown in color. A yellow border on the lesions can also occur. In cool-season turf grass, the symptoms are similar to those of melting-out.

Gray leaf spot is favored by daytime temperatures between 80ºF to 90ºF and night temperatures above 65ºF. It is also found in areas with high nitrogen levels and that are stressed by various factors, including drought and soil compaction. This disease is most severe during extended hot, rainy and humid periods.

Large patch disease of turfgrass is most common in the fall and in the spring as warm season grasses are entering or leaving dormancy. Large patch is caused by the fungus Rhizoctonia solani. It can affect zoysiagrass, centipedegrass, St. Augustinegrass and occasionally bermudagrass.

Symptoms of this lawn disease include irregularly-shaped weak or dead patches that are from 2 feet to up to 10 feet in diameter. Inside the patch, you can easily see brown sunken areas. On the edge of the patch, a bright yellow to orange halo is frequently associated with recently affected leaves and crowns. The fungus attacks the leaf sheaths near the thatch layer of the turfgrass.

Large patch disease is favored by:

“Large Patch” and “Spring Dead Spot” appear on turfgrass during spring green-up. While symptoms appear in the spring, truly effective disease management starts in the fall.

Rhizoctonia large patch is likely to develop on zoysia, centipede and St. Augustinegrass during cool, wet periods in spring. Zoysia is particularly affected. Look for yellow or straw-colored patches a few inches to 10 feet or more in diameter. Turfgrass shoots at perimeters of patches will have leaf sheaths that are dark brown to black. Lush, fertile turf is highly susceptible to Rhizoctonia; therefore, delay nitrogen applications until mid-May or later. Sound cultural practices help control the disease; therefore avoid frequent light irrigation to reduce humidity. Allow time during the day for plant canopy to dry. Increase air circulation. Shrub and tree barriers contribute to shade and lack of air circulation. Reduce thatch (no more than 1 inch thick).

Fungicides can be applied in the spring to aid in the control of the disease. Fungicides that contain azoxystrobin, flutolanil, and pyraclostrobin, have provided 28 days control of large patch in tests at UGA. Repeat applications may be required if night temperatures less than 55oF persist after the grasses come out of dormancy. However the most effective management of large patch occurs in the fall.

Spring dead spot is typically more damaging on intensively managed turfgrass (such as bermudagrass greens) compared to low maintenance areas. Initial symptoms appear in the spring, when turf resumes growth from its normal winter dormancy. As the turf ‘greens-up,’ circular patches of turf appear to remain dormant, roots, rhizomes and stolons are sparse and dark-colored (necrotic). No growth is observed within the patches.

Recovery from the disease is very slow. The turf in affected patches is often dead, therefore recovery occurs by spread of stolons inward into the patch. The disease is caused by several fungi in the genus Ophiosphaerella (O. korrae, O. herpotricha and O. narmari). These fungi infect roots in the fall, predisposing the turf to winter kill. Research shows that freezing temperatures make the disease worse.

Spring treatment consists of encouraging growth so that the stolons will move into the dead area. Implement regular schedules of dethatching and aerification. These activities encourage growth and will help to control the disease.

Fall application of fungicides is essential for an effective control. Currently, fenarimol, myclobutanil, azoxystrobin, thiophanate-methyl, and propiconazole are labeled for spring dead spot control. Management strategies that increase bermudagrass cold tolerance such as applications of potassium in the fall prior to dormancy are thought to aid in disease management. However, researchers have recently found that fall applications of potassium at high rates actually increased spring dead spot incidence. Therefore, application of excessive amounts of potassium or other nutrients, beyond what is required for optimal bermudagrass growth, is not recommended.