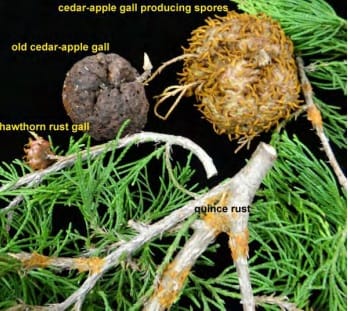 Each spring, as the leaves of Rosaceous plants such as apple, pear, and hawthorn are emerging, the Eastern Red Cedar (Juniperus virginiana) produces the bright orange fructifications of a group of rust fungi in the genus Gymnosporangium. Early spring rains induce the cedar rust galls to break hibernation and produce gelatinous orange protrusions that release basidiospores. However, these basidiospores do not re-infect the cedar tree but instead drift off to find the appropriate secondary Rosaceous host (like apple, pear, and hawthorn). On the leaves and/or fruit of the secondary host, the fungus will mate and produce a different type of brightly colored spores. These spores only infect the cedar tree and this infection results in the cedar galls that can take up to two years to mature.

The most common and visible cedar rust is cedar-apple rust (G. juniperi-virginianae). Cedar-apple rust forms large round galls on the small branches of the cedar trees. (see image 1) The basidiospores produced by the galls infect the newly emerging leaves of apple and crabapple. On susceptible cultivars, the resulting leaf lesions can cause the leaves to fall during years of heavy infection. Fungicide sprays may help on susceptible trees. However, in the home and/or organic garden, the use of apple cultivars with resistance to both cedar apple rust and fireblight is highly recommended. Removal of cedar trees in the immediate area can help but may not be practical. Check the Georgia Homeowner’s Pest Management Guide for recommended treatments and cultivars.

Two other cedar rusts are common in Georgia, quince rust (G. clavipes) and hawthorn rust (G. globosum). The perennial galls of quince rust are formed under the bark on the cedar branches and are nearly invisible until the gelatinous protrusions emerge from cracks in the bark (see image 1). The spores produced by these galls infect the fruits of the apple, quince, mayhaw, and pear (see image 2). Hawthorn rust produces small inconspicuous galls on the cedar (see image 1). This rust infects the leaves and shoots of ornamental hawthorn. 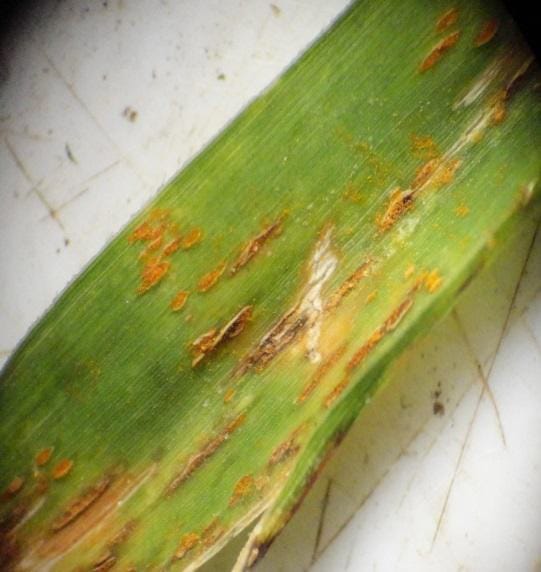