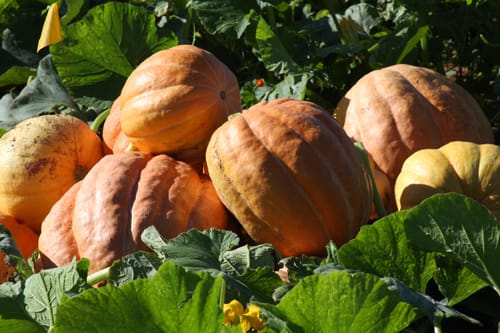 Do you want to grow beautiful orange pumpkins for Halloween?  But, after years of seeing your crop succumb to disease you have become discouraged.  And, after learning that most of the pumpkins you see for sale at church pumpkin patches are grown in New Mexico (think LOW humidity), you have given up.  Well, I have great news for you!

University of Georgia researchers have developed and released a new pumpkin variety bred especially to handle Georgia’s summer climate.  Orange Bulldog was developed by UGA researchers from germplasm collected in South America.  It shows greater resistance to viruses than conventional pumpkins.  The vines show resistance to powdery mildew and downy mildew.  This is really great news for Georgia gardeners!

The pumpkins average about 10 pounds.  Most have an internal cavity which is perfect for carving.  The color ranges from a salmon color to a burnt orange.  And, seeds were readily available for 2016 and should be for 2017.

So, as you enjoy this year’s Jack-o-Lanterns make your growing plans for next Halloween!