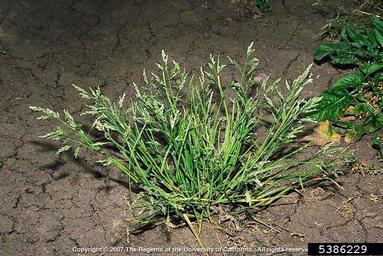 Contrary to its name, both annual (live for one season) and perennial (live for many seasons) biotypes of annual bluegrass may be found in turf.

This publication describes methods of control for annual bluegrass in residential turfgrass lawns.

To see the entire publication visit this site.

Lespedeza Identification and Control in Turfgrass

Common lespedeza is a freely-branched summer annual legume that is a problematic weed in lawns and other turf areas. Common lespedeza, also known as Japanese clover or annual lespedeza, has three smooth, oblong leaflets with parallel veins that are nearly perpendicular to the midvein. As common lespedeza matures, the stems harden and become woody, which is attributed to persistence and competition with turfgrasses in late summer. Flowers are pink to purple and present in the leaf axils. Other lespedeza species may also be found as weeds in turf but common lespedeza is the primary species in Georgia.

This publication describes ways to identify and control lespedeza in turfgrass, including:

To see the entire publication visit this site.