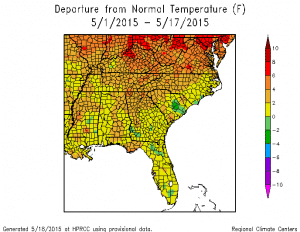 May 2015 is half over and it is time to see how the monthly climate is doing so far.  The maps from the High Plains Regional Climate Center below show that for the region as a whole, temperatures are running about 1.5 degrees above the 1981-2010 normal, while the precipitation is much below normal and in some areas none has fallen at all, which is shown on the “percent of normal precipitation” map as an area of dark red, indicating zero percent of normal rainfall for the month.  Atlanta broke their record for the driest start to May before finally getting rain on 5/17.  Athens, GA is the driest May to date on record and Macon is tied for the driest, although rain is likely at both locations this week. 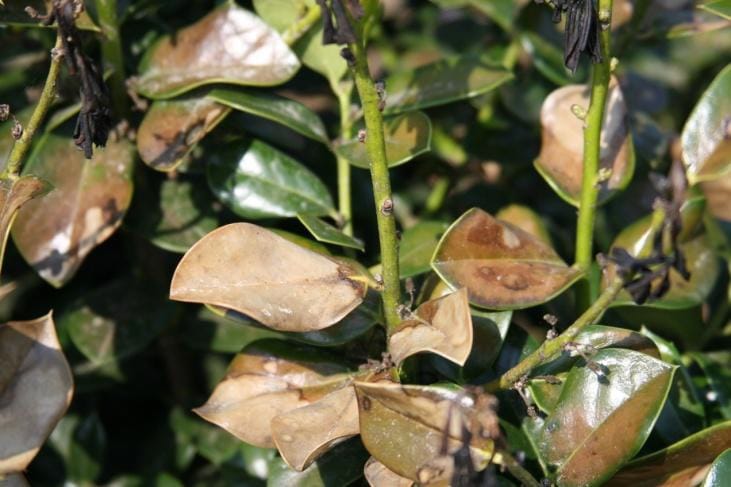 Freeze injury symptoms can include blackening or bleaching of foliage, tip dieback, stem or branch splitting, and plant death. The damage may not be readily apparent, especially on trees. Trunk damage and splitting may develop months to years later.

The best approach to deal with freeze injured tissues is to prune off the affected tissues. Prune dead branch tips after bud break. Give plants, such as liriope, a shearing to remove dead foliage. 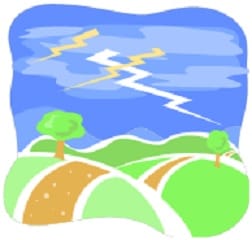 Now that spring is here and warmer, more humid air is entering the US, severe weather and tornado chances are increasing across the country.  There is an excellent animation that shows how the region of severe weather occurrence moves around the country at the NOAA Storm Prediction Center.   The area of most likely severe weather moves north and south with the area of greatest temperature contrast and most active storm track as the sun’s angle changes over time.

The Weather Channel has also provided a series of bar graphs which show the monthly probability of tornadoes for over 40 cities around the country (link).  From the graphs you can see that the Southeast has a split severe weather season, with the major peak in spring and a secondary peak in late fall.

For answers to every question you can ask about tornadoes, check out the tornado FAQ from the Storm Prediction Center.

And make sure you have access to real-time severe weather warnings via smartphone app or NOAA weather radio, especially if you are working outside on high-risk days. 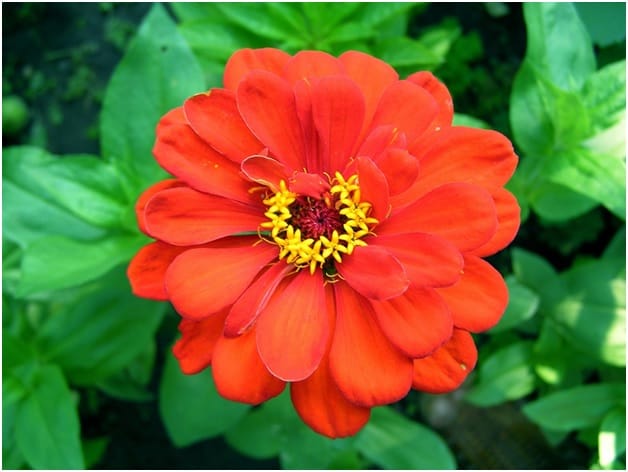 Taken from the CASE website and written by Pam Knox, University of Georgia Agricultural Climatologist

Now that March is upon us and the atmospheric pattern has shifted into something that is bringing more spring-like weather to the Southeast, it’s time to think about planting.  And that means thinking about the last frost of the winter.

If you need the information for a different temperature threshold, then a good source of information is the Southeast Regional Climate Center.  You can go to their web page www.sercc.com and pick “Historical Climate Summaries” from the “Climate Data” menu at the top.  Pick your station and then look for “Spring Freeze Probabilities” on the left menu.  Here is the graphical output for Tifton, GA. What this shows is that for Tifton, for a temperature of 32 F (orange line) at the 50th percentile (for the average date), the date is about March 10.  You can click on the link for tabular data to get a table of numbers instead of the graph shown here.  Keep in mind that this is for the period of record for the station, and that last dates for spring freeze have been trending earlier in the season in recent warm years.  If you have a different source of freeze information that you like to use, please let us know! 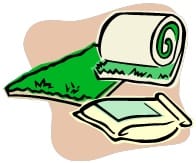 Clint Waltz, Extension Turfgrass Specialist, University of Georgia. This info is edited from a longer article which can be read here.

Dormant transplanting of trees and ornamentals in the Southeastern United States is a common practice. Warm-season turfgrass sod can also be successfully established during dormancy.

Research and practical experience has shown that warm-season turfgrasses may be successfully sodded during the off-season (October-April) when the grass is dormant or slowly growing. However, the cooler climates in and north of Atlanta may damage some turf species. More winter injury has been observed on zoysiagrass and centipedegrass as compared to bermudagrass sodded in the fall or winter.

See the original article here which has more information 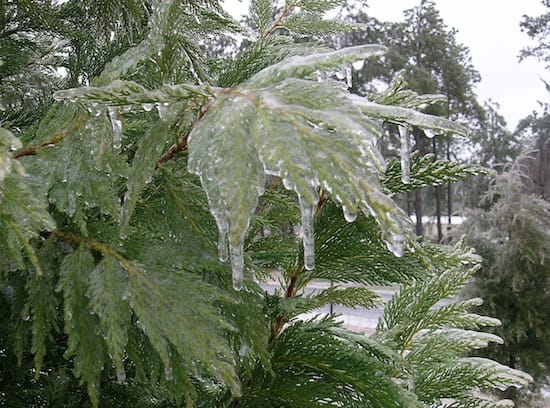 Landscape plants get plenty of attention during the summer, but they need protection during Georgia’s winter months. Rather than trying to keep plants warm, gardeners should help protect plants from wind, snow, ice, drastic soil temperature changes and heat from the sun on cold days.

Reducing water loss can protect evergreen plants. All plants transpire, or lose, water through their leaves. Evergreens continue to lose water during the winter, so the plant’s roots must be able take up moisture.

Homeowners are more conscious of watering shrubs during the summer and often neglect to water plants during cold weather. Roots absorb moisture when it’s available, but during a dry period or even when the ground is frozen, moisture isn’t available. The plants continue to transpire water, drawing moisture from living cells. If too much water is released, the plant’s cells die, causing the plant’s leaves to turn brown and die.

High winds and warm sunshine on cold days result in a higher rate of water transpiration. Protection can be offered by relocating susceptible plants to a sheltered location. Also, provide them additional water during dry periods or prior to expected hard freezes.

An additional layer of mulch is also recommended during winter months after the first freeze. Mulch will reduce water loss from the soil, aid in transpiration and reduce “heaving” of the soil as the ground freezes and thaws. Soil heaving, or frost heaving, occurs when soil swells during freezing conditions and ice grows towards the soil’s surface.

For more information on how to care for ornamental plants in the winter, see the UGA circular Winter Protection of Ornamental Plants. 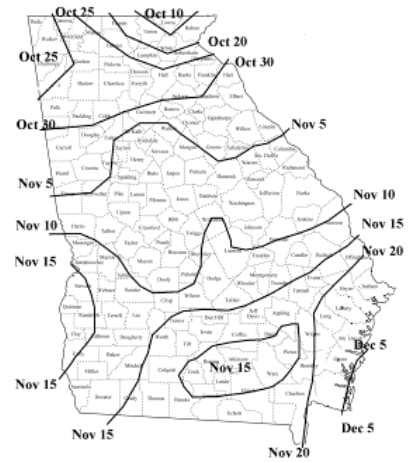 Note: Organization of ideas based on Dunwell and McNeill, 2009. 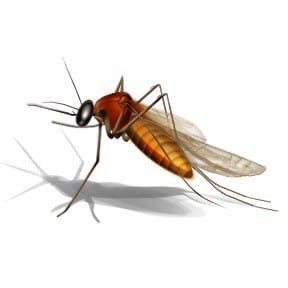 Where, oh where, does the virus go (in the winter)?

It’s that time of year when those in mosquito surveillance and control think fondly of consistently cooler temperatures and eagerly await that first hard frost. Of course, this is already happening in some places up north. We may have to wait a while longer in here in Georgia. But that does bring to mind the question: Where do all the mosquitoes go once the colder weather arrives?

Mosquitoes, like all insects, are cold-blooded creatures. As a result, they are incapable of regulating body heat and their temperature is essentially the same as their surroundings. Mosquitoes function best at 80 F, become lethargic at 60 F, and cannot function below 50 F. In tropical areas, mosquitoes are active year round. In temperate climates, mosquitoes become inactive with the onset of cool weather and enter diapause (hibernation) to live through the winter. Diapause induction also requires a day length shorter than 12 hours light (more than 12 hours dark). All mosquitoes pass through four developmental stages: egg, larva, pupa and adult, and diapause can occur in any of these stages depending on the species.

What, if anything, does this mean for West Nile virus (WNV)? If the mosquitoes are infected with WNV when they enter diapause, it should overwinter with them to be transmitted to birds when the mosquitoes emerge the following spring. Temperature is the crucial factor in the amplification of the virus. Studies in various states have shown that WNV does indeed overwinter in mosquitoes. The virus does not replicate within the mosquito at lower temperatures, but is available to begin replication when temperatures increase. This corresponds with the beginning of the nesting period of birds and the presence of young birds. Circulation of virus in the bird populations allows the virus to amplify until sufficient virus is present in the mosquito populations (and vector mosquito populations are high enough) that horse and human infections begin to be detected.

In the Northeastern U.S., Culex pipiens, the northern house mosquito, is the most important vector species. This species overwinters as an adult, and has been found harboring WNV during the winter months. This mosquito goes into physiological diapauses (akin to hibernation) during the winter months, and while it may be active when temperatures get above 50°, it will not take a blood meal.

Culex quinquefasciatus, the southern house mosquito and the major vector for WNV in Georgia, also overwinters as an adult, and also goes into diapause when winter comes, and it is likely that this mosquito also harbors WNV throughout the winter months.  However, the southern house mosquitoes go into more of a behavioral diapause when temperatures are below 50°, and are quite capable of taking a blood meal (and maybe transmitting WNV) when things warm up during the winter, which is not an unlikely occurrence here in Georgia especially as one goes further south. So, although the risk for WNV transmission in the south in the winter months is very low, it is certainly possible.

Big cities with large expanses of concrete, asphalt, and buildings are usually warmer than the suburbs or countrysides that surround them, a phenomenon known as the urban heat island effect. Now new research from North Carolina State University shows that these urban heat islands increase the number of young produced by the gloomy scale insect — a significant tree pest — by 300 percent, which in turn leads to 200 times more adult gloomy scales on urban trees. 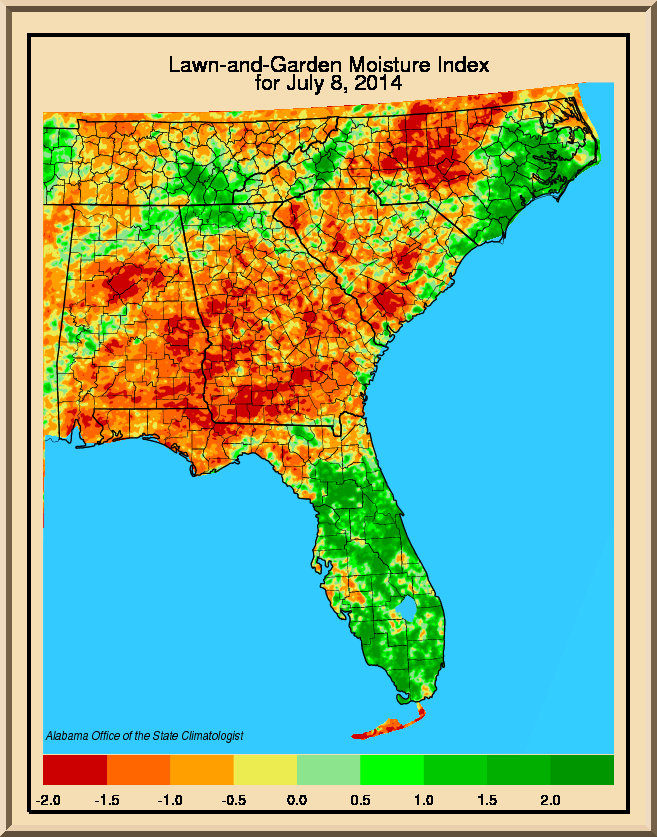 Information taken from the Climate and Agriculture in the Southeast (CASE) newsletter.

Do things seem really dry where you are?  How much should you water your lawn or irrigate your crops?  There are a number of commercial products out there that can help you determine this, but one simple method that is available for free is the Lawn and Garden Moisture Index, a daily map put out by the Alabama State Climatologist based on estimated rainfall from radar.  This map tells you whether your lawn and garden have enough moisture or if more needs to be added.  This is one of a number of useful products available on AgroClimate.org, a website developed by the Southeast Climate Consortium, a group of eight universities around the Southeast. This map shows the areas with surplus water in greens (no need to water or irrigate there) and areas with a water deficit in oranges and reds.  The darkest red areas are almost 2 inches short of water, including a large portion of Georgia.  If this situation continues, then the Drought Monitor is likely to add D0, abnormally dry conditions, to the next weekly Drought Monitor map.  Areas with deficits of an inch or more should be irrigated to help alleviate the dry conditions and keep lawns and gardens healthy.